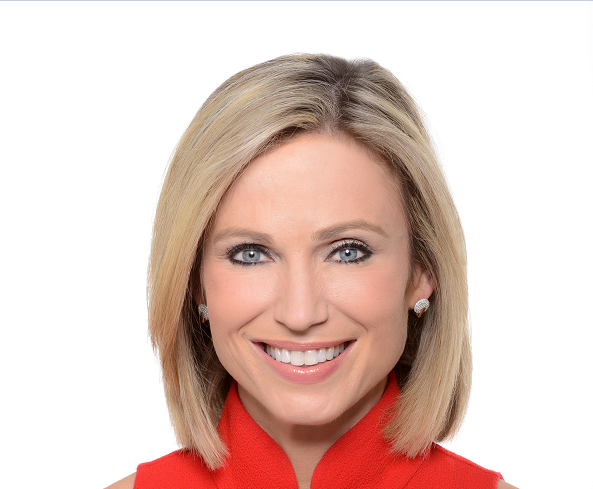 Amy Robach has a banana shaped body. Below is all her body measurements including height, weight, shoe size, dress size, bra size and more!

Amy was born on February 6, 1973 in St. Joseph, Michigan. She holds a college degree in Broadcast Journalism from the University of Georgia. Young Robach also competed on Miss Georgia in 1994 and ended on a great 5th place. She used to work as a national correspondent for NBC but switched to ABC in 2012. She was married to Tim Macintosh until 2008. She now lives with her second husband Andrew Shue. Robach was diagnosed with breast cancer in 2013. Her treatment was complicated because cancer has spread but she is healed now.

“When I first sat down with my oncologist the day before Thanksgiving, and she told me I would need 8 rounds of chemo, one of my first questions admittedly was: ‘Will I lose my hair?’ It sounds shallow, I know, but it was a very scary image to me.” (Amy Robach)

“I am going to cut my hair very short; I’ve never done this before… I want to say I had something to do with how I look, not the cancer.” (Amy Robach)

“‘You have chickens?’ That’s what nearly everyone asks next, after they find out about our family pets. They just need to make sure they heard me correctly. Perhaps it’s because I don’t come across to most as a rural-loving farm girl.” (Amy Robach)

“I have two cousins with juvenile diabetes. They both contracted the disease before the age of 5, and it was so heartbreaking watching them go through daily blood tests and injections. It is such a difficult disease to live with and requires constant attention; a tough thing to explain to a child.” (Amy Robach)