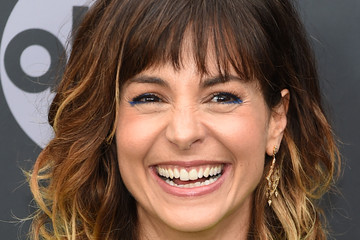 Stephanie Szostak has a banana shaped body. Below is all her body measurements including height, weight, shoe size, dress size, bra size and more!

Stephanie was born June 12, 1975 in Paris, France. Although she originally relocated to US in order to study business, her beauty and talent got her a spot in show business. She played for example in The Rebound, We Bought a Zoo, and Iron Man 3. Since 2018, Szostak is playing Delilah Dixon in a television show A Million Little Things. She married her long-term boyfriend ‎Britt Szostak and together they have two children.

“I played golf competitively as a teenager. I actually took a year off after high school and just played golf and went to a university in France for maybe a month and dropped out.” (Stephanie Szostak)

“People are so obsessed with making their careers and having a big house; then you realize that kills your dreams. It even kills what makes your life because you get so busy inside.” (Stephanie Szostak)

“My dad’s American, and my mom’s French. I lived in France for the first 18 years of my life, then came here to go to school at the College of William and Mary. I studied marketing. I really didn’t know what I wanted to do, so I thought that’s what I should do – study business – because it would give me the best chance to find work.” (Stephanie Szostak)

“We don’t have drama in public schools in France. I had never taking an acting class.” (Stephanie Szostak)

“I started with commercials – for shampoo, pancakes, insurance, Volvo. I did a Lux soap commercial with Sarah Jessica Parker. And I got a role in an indie film called ‘Satellite’ that did well in festivals.” (Stephanie Szostak)